Between 2015 and 2018, Karin worked as postdoctoral researcher at the University of Amsterdam. Specifically, she worked at the Center for research on Children, Adolescents, and the Media (CcaM) which is part of the Amsterdam School of Communication Research (ASCoR). At CcaM, Karin aimed to better understand the role of narrative media entertainment in children’s and adolescents’ lives.

Karin is an active member of the academic community. Within the Netherlands-Flanders Communication Association (NeFCA), she co-founded the Young Scholars Network and organized sessions at the Etmaal van de Communicatiewetenschap. Within the International Communication Association (ICA), Karin was Secretary of the Children, Adolescents, and the Media (CAM) division for two years. During that time, she set up the monthly interview series “CAMmer in the Spotlight“. Karin also served as a member of the Student and Early Career-scholars Advisory Committee (SECAC), and co-organized the young scholars Reception and several Blue Sky Workshops at the annual conference of the ICA.

Karin is also interested in thinking about ways to improve the scientific process and scientific conduct more broadly. She participated in the LERU summer school in Helsinki, Finland (2014) themed “Doing the right things right –Research Integrity in a Complex Society”. Within the Consortium on Individual Development, she was a member of the working group on “Innovation of measurement”. In 2017, Karin and her colleague dr. Bert Bakker co-organizes a preconference for the Etmaal van de Communicatiewetenschap themed Moving beyond self-report: Measuring arousal, emotional, and cognitive responses to media through physiological measures.

When she’s not busy teaching or research, Karin likes to travel, read books, go to the cinema, visit a museum, take photos, and eat cake (preferably as much as possible). She is the proud mother of a son and twin girls. 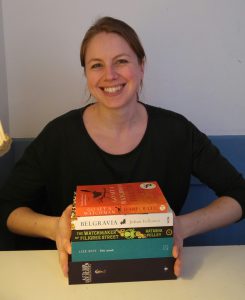